The water is pristine, the streets are filled with bikes, and there's a park around every corner. No wonder Stockholm is Europe's first Green Capital for 2010. For visitors, there are sustainable hotels, green cuisine and organic fashion

Even in Stockholm's ritzy Le Rouge restaurant, where dinner for two can set you back more than $300, asking for a bottle of water will lead to a rebuff. “Our own water is clean and just as good,” a waiter says mindfully, “and it's free.” What runs from the taps in Sweden's capital is indeed fresh and tasty – and a point of pride for locals, who rarely if ever buy bottled water. Keeping it clean enough to drink from, swim and fish in, however, requires significant effort.

Which is why, after decades of living green, clean and organic, Stockholm has been crowned the first Green Capital of Europe for 2010. It's a nod to the city's ongoing work to preserve its environment: This is a place where gas-guzzling cars are frowned upon and leafy parks and expansive bike paths are plentiful. For visitors, it doesn't take long to appreciate Stockholm's natural setting, and here you can even shop with a conscience, at hotels, fashion boutiques and restaurants that run on renewable energy and peddle everything from organic coffee and cakes to fair-made sweaters and shawls. It's one of the world's best cities for a green vacation.

You just have to make like the locals. More than 90 per cent of Stockholmers live within 300 metres of a green area. When the sun is out, so are they, soaking in as much fresh air and outdoor activity as they can. Even in winter, when daylight is scarce, walkers and cyclists are out navigating the many car-free paths along the shores of the 14 islands that make up the city.

“Battling the elements there seems easier,” says Corey Dias, a Torontonian who lived in Stockholm for three years. “The air is so fresh and Stockholmers are so sun-starved that at any opportunity, regardless of the temperature, they'll get outside.” Indeed, cafés supply woolly blankets so patrons are never too cold to sit outdoors.

But physical beauty and sunny patios didn't win Stockholm the Green Capital award. From a short list of eight finalists that included Copenhagen, Amsterdam and Oslo, Stockholm prevailed with its clean water and air, plans to reduce carbon emissions, to increase its collection of food waste to create bio-gas (mostly used as fuel in eco-friendly cars and buses) and to further develop its excellent public-transport system. Stockholm's 760 kilometres of cycling lanes, and a congestion charge that deters inner-city driving, have significantly improved air quality– a factor both locals and tourists enjoy. Even if you're only stopping in for a few days, it's impossible not to get lured by the city's eco ethos.

SUSTAINABLE HOTELS
Sweden is famously design-savvy, and its hoteliers thrive on chic green design. Guests at the Scandic Anglais hotel in central Stockholm are provided with keycards that are made of birch instead of plastic. Rooms are outfitted in natural materials (lots of wood, wool and linen) and they have low-energy light bulbs, a variety of recycling bins, and eco-labelled bathroom amenities that come in fixed containers instead of disposable ones. And, every morning, it serves up a certified organic buffet breakfast.

This is typical for Scandic, a Swedish hotel chain that developed an environmental policy in 1994 – long before most corporations jumped on the sustainability bandwagon. Fifteen years on, Scandic is one of the greenest companies in the industry. It was the first major Swedish company to serve fair-trade coffee and publishes its resource consumption and savings online. Last year, Scandic stopped selling bottled water, a move that the chain says has cut fossil carbon dioxide emissions by 160 tonnes per year.

EATING YOUR GREENS
Another establishment specializing in natural cuisine is the famed Operakällaren, a royal favourite. (Chef Stefano Catenacci presides over all banquets held at Stockholm's Royal Castle.) It was the first Michelin-starred eatery to receive Scandinavia's coveted Svanen eco-label. “To get the Svanen certification you have to comply to strict guidelines concerning waste, and electricity, water, and chemical usage,” says Claes Anerud, managing director at Nobis, the restaurant's parent company, “You also have to buy a certain percentage of ecologically farmed and locally produced products – which isn't always easy when your restaurant is in the middle of a city.”

ORGANIC FASHION
In the realm of fashion, Johanna Hofring, the serene and willowy owner of Ekovarahuset (literally, the House of Organic) is a Stockholm eco-icon. With an earthy, yet chic collection for adults and children, her tiny boutique in the old town is the go-to place for organic outfits. Hofring is quick to point out the few exceptions: zippers, some buttons, and threads. “We haven't found good alternatives for them yet.”

She has a shop in New York as well, but worries that Americans may not yet have embraced Stockholm's philosophy on clean living. “In New York, there isn't the same concern for sustainability. They seem to be in a bubble,” Hofring says. “Here, we've been aware of organic materials for years. We believe that people are better off buying a few high-quality garments that don't deplete our natural resources and that can be repaired and recycled over time.”

TOO GOOD TO BE TRUE?
Does Stockholm sound too virtuous to be true? It is, after all, a big city with inevitable big-city woes. You'll see litter and graffiti near the main train station. A surprising number of shoppers tote plastic bags. And even though bicycles and eco-cabs (a snazzier version of rickshaws) can be seen all around town, taxis and cars still rule the roads.

Still, Europe's Green Capital is setting a good example for cities around the world. On a sunny Saturday morning, Stockholm native Maria Booth and her husband Mark are at one of the many waterfront cafés along Kungsholms Strand with their 18-month-old daughter. Kayakers whiz past and a fisherman has thrown a line in off the dock. “Our daughter can play nearby while we have a coffee. Even if she picks up something from the ground and puts it in her mouth I'm not really fussed,” Booth says. And, she adds, tongue only half in cheek, “Stockholm's dirt is much too clean to be harmful.” 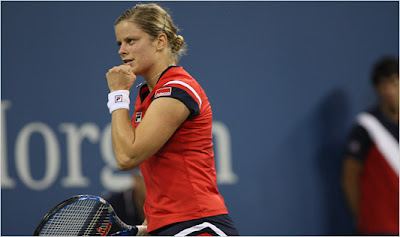 Kim Clijsters, age 26, retired from professional tennis in 2007. During her retirement she married American basketball player Brian Lynch and gave birth to a daughter. Now eighteen months old, Jada was in attendance at Arthur Ashe Stadium when her unseeded mother became the 2009 US Open Champion. Clijsters' victory was achieved in just her third tournament back on the women's tour. Pretty well perfect - and fit.
(Photo courtesty: Josh Haner)
Posted by Lori at 5:36 PM No comments: 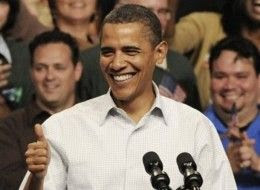 This morning I watched Barrack Obama on television. He was speaking about the need for health insurance for all Americans at a rally in Minneapolis.
At the end of his speech Obama told a story of being on the campaign trail in South Carolina. He woke up in a Greenville hotel room for an early morning drive to Greenwood. He was exhausted, missing his family. and angry about a New York Times article about him. It was raining, his umbrella blew out and he got soaked while running to the car.
Obama got soaked again running from the car to the Greenwood rally and when he entered the building he saw about 20 people. He was disappointed, thinking about the 1 1/2 hour drive back to Greenville, when he heard a voice behind him ask: "Fired up?" He turned to see a small woman in her 50s, a Greenwood city council member. "Ready to go?" she asked. The woman repeated, "Fired up?" and the small group responded, "Fired up". "Ready to go?" she asked. "Ready to go". Obama started to feel better and joined in. The woman continued to lead the chant until he was fired up and ready to go.
Obama told the crowd he and his staff repeated the chant many times that day and on many days during the campaign. One person can make a difference, he said. One person had made the difference that day in Greenwood.
Then he asked: "So Minneapolis, are you fired up and ready to go?" "Yes", the crowd responded. "Fired up?" he shouted. "Fired up!", they replied. "Ready to go?" he shouted. "Ready to go!"
"Fired up?" "Fired up!" "Ready to go?" "Ready to go!"
I was laughing and tears were streaming down my face.
Posted by Lori at 3:30 PM No comments: 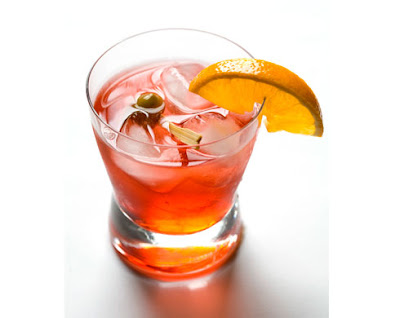 The Venetian Spritz
4 ounces Prosecco (or any sparkling wine)
Sparkling water
1.5 to 2 ounces Aperol
Orange
Lemon
1 green olive
In a rocks glass over three ice cubes pour 1) Prosecco 2) a dash of sparkling water and 3) Aperol in that order. Garnish with a slice of orange and/or a twist of lemon and one pwp green olive.
(Photo courtesy of Frances Janisch)

It ain't over till it's over: Pretty well perfect 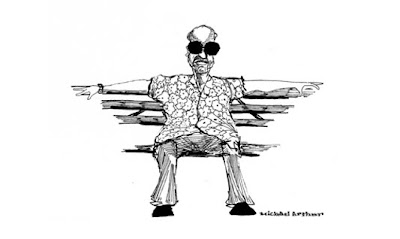 From Michael Arthur's Sketchbook: A Summer in the City 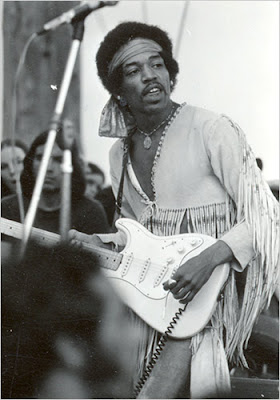 Bad weather and logistical problems caused long delays. Jimi Hendrix did not appear on the Woodstock Festival stage until Monday morning. The audience which had peaked at over 500,000 people, counted at most, 180,000, many of whom merely waited to catch a glimpse of Hendrix before leaving.

Festival MC Chip Monck introduced the band as "The Jimi Hendrix Experience", but Hendrix quickly corrected this to "Gypsy Sun and Rainbows, for short it's nothin’ but A Band Of Gypsies" and launched into a two hour set, the longest of his career.

As well as the two percussionists, the performance notably featured Larry Lee performing two songs and Lee sometimes soloing while Hendrix played rhythm in places. Most of this has been edited out of the officially released recordings, including Lee's two songs, reducing the sound to basically a three piece.

The concert was relatively free of the technical difficulties that frequently plagued Hendrix's performances, although one of his guitar strings snapped while performing "Red House". Jimi kept on playing.

The band, unfamiliar with playing large audiences and exhausted after being up all night, could not always keep up with Hendrix's pace. Regardless, the guitarist managed to deliver a memorable performance, climaxing with his highly-regarded rendition of the The Star-Spangled Banner, a solo improvisation which is now regarded as a special symbol of the 1960s era.

"Before the rains came" - Woodstock August '69 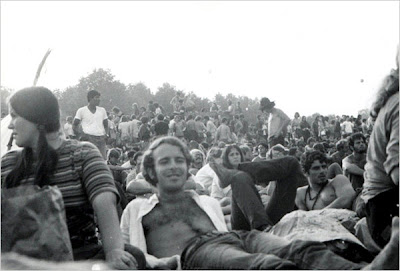 "Fest goers settling in for the music. Before the rains came."